Breaking Position – The dog self-releases without a cue from the handler. 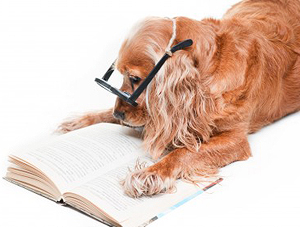 Building Duration – Training to increase increments of time for a sustained behavior.

Contacts – The designated portion of an a-frame, dog walk and teeter that a dog is required to touch with at least one paw for safety. In the United States, the contact zone is yellow.

Control Behaviors – Behaviors or exercises that create self-control in the dog, such as walking at your side with handler focus.

Criteria – Setting a standard for rewardable behavior. Being clear in your mind about what each piece of the behavior you are training should look like and rewarding for nothing less. To best support the dog’s success, your criteria should be clear-cut, black and white rather than gray. Such as a 2 paws on 2 paws off contact behavior: I would not reward for my dogs paw being placed off the side of the plank. I would only reward for the two paws straight off the plank.

Cue – The object, word, or physical signal that tells the dog to perform a trained behavior.

Drive – Levels of enthusiasm. For agility, we work toward putting our dogs in a state of “high drive” therefore increasing speed through adrenaline boost.

Eye Contact – The dog looks directly in your eyes, thus placing immediate attention on you.

High Value Reward – Primarily used in class and during specific practice sessions, high value rewards are whatever the dog sees as super exciting, such as cooked chicken or other meat, cheese, commercial dog treats, or a favorite toy. The dog decides which of these is the most motivating, so you may need to try several. The best idea is to bring a mixture of different treats.

Ordinary dry kibble dog food is not a high value reward, although it can be used as a training tool when you have the dog work for his daily food.

Latent Learning – The type of learning that occurs, somewhat passively, but you don’t see it exhibited until there is an incentive to do so.

Here, it is important to understand the difference between ‘learning’ and actual ‘performance’. For example, imagine that you ride to school with a friend every day, and that your friend is always driving the car. Assuming you are paying attention, you could easily ‘learn’ the route to school, but have no reason to exhibit your possession of that knowledge. However, one day your friend gets sick and you have to drive yourself to school for the first time. You then have incentive to ‘perform’ your knowledge of the route learned by observing your friend. You have thus demonstrated the process of latent learning.

Nose Target – Anything that a dog is trained to touch with his nose, typically a disc of some sort. This is a ‘shaping’ activity, often used for contact training.

Offer – When presented with an object (including agility equipment), the dog will volunteer various behaviors as he attempts to figure out which one will get rewarded. Example: You walk up to a tunnel, the dog goes around and doesn’t get a reward. The dog jumps on the tunnel and doesn’t get a reward. The dog goes through the tunnel, and gets a reward! Thus, by offering, the dog learns that going through a tunnel gets the reward, and will likely repeat that action when presented with a similar object.

Allow the Dog to Choose – a way of explaining “offering.” The dog is presented with multiple options and the handler waits for a “good choice” to reinforce. Should the dog choose incorrectly, the handler simply withholds the reinforcement (reward).

Proof – Testing trained behaviors with distractions, habitats and positions until they are 100% reliable.

Recall – Synonymous to “come”; the dog returns to you when called. “Work on your recalls” simply means to develop a strong willingness in your dog to come when called.

Reinforcement – A reward that is given to the dog when a behavior is performed correctly, according to criteria. To be a reinforcement, it must be something the dog enjoys such as food, toys, or praise.

Release – A word to cue the dog that it is okay to move from position.

Reliability – You can trust the behavior is well trained and the dog will perform as cued.

Rev the Dog Up – This involves getting the dog super excited. Take the time to learn what gets your dog ready to play and have some fun. Does food get your dog pumped? What about a game of wrestling? Playing tug? Revving the dog up will get the dog most eager to train!

Shape – Multiple methods used to achieve a trained behavior, such as scanning, prompting, targeting and luring:

Lure – having your dog follow a treat, toy or your body movement (such as your hand) into the desired position, direction or behavior.

Prompt – environmental manipulation that will help the dog do what you want (example: I want my dog to place his chin on an object so I bring the object to my dogs chin, then I mark it and reward it.) This step would be repeated until the dog creates an association between behavior and object.

Scan – capturing a behavior your dog does naturally (example: clicking a dog that sneezes to teach him to sneeze).

Target – teaching your dog to perform a particular behavior when a specific object is presented (example: your dog is taught to put his left paw on a circle, his right paw on a square, and his chin on a triangle).

Transfer of Value – Creating an association of a non-value item to something of value to the dog. In time, by pairing the two together both are seen as valuable.

Value – Something that has worth to the dog such as food. We work to transfer this value to various obstacles. For example, the value of the food-reward over time becomes associated with the jumps, and eventually the jumps appear to have value to the dog even without the treats.